With our kick-off in the books, the ball had officially (to mix our sports metaphors) started rolling on our adventuresome trip.  Immediately at the conclusion of the Mariners game, we were on the road to Oakland.  13 hours to make a 12 hour drive. There would be little sleep and no time to explore the surrounding area before this one.  As Brian took the first shift driving through the night, Tim attempted some valuable sleep. By the time the sun rose over the California Hills, we had both slept a few hours, and (other than the lack of a shower) we were fresh as we could be for game two.

Around the Park
Parking around the park was a no-brainer for Oakland. Given the tight timetable, our only realistic option was to dock in the stadium parking lots. The park is right off the highway, so there were little options around the park (a stark contrast to our Mariners experience). We arrived 1 hour before the game and found a mixture of fans tailgating.

External Aesthetics
Well, all the critiques we had read and heard regarding the external aesthetics were vindicated.  Even on a beautiful, sunny day, the stadium looked cold and uninviting.  The large concrete structure is in stark contrast to the recent trend of intimate feeling parks.  And why should it?  It’s a football stadium.  Everything from the metal fencing separating fan entrances to the NFL signage, the stadium screamed “not a place for baseball.” 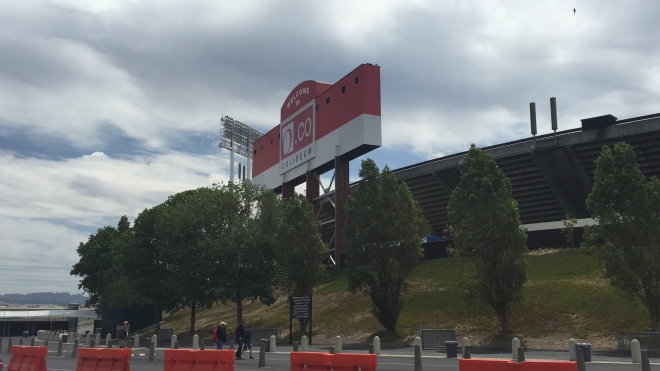 Tickets
We opted for walk-up tickets again and were pleasantly surprised by the prices and customer service offered.  The salesperson walked us through our options and their respective pros and cons.  For instance, the third deck, while very high up, features $5 worth of free food in the price. One of the consistently positive aspects we heard about O.co was its fans in the outfield bleachers, so we opted for those tickets.  The seating out there is first come-first serve (much like Wrigley bleachers back home).

Internal Aesthetics
Walking in and around the park, the pervasive thought was: football. Concrete as far as the eye can see.  Many of the staircases were blocked off (because the A’s block off a majority of the 3rd deck seating). Even though this is where the A’s play all of their home games (and have since they moved to Oakland in 1968), the internal aesthetics reminded us of the years that the Nationals still played in RFK before moving into Nationals Park. 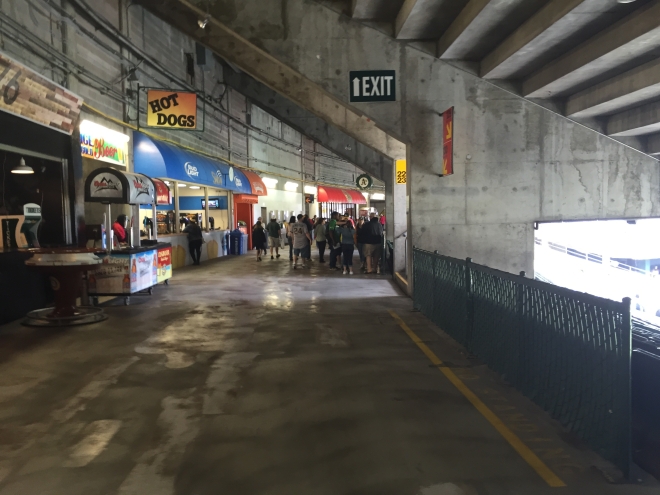 Seats
The bleachers were easy to find and provided a great view of the field. As the stadium began to fill up, we were treated to the antics of the Crazies in our RF seats.  Soccer-style cheers and bass drums booming fueled the fan experience in the outfield.  While it didn’t compare with the views of downtown Seattle, we could view both of the new video boards, and were only shielded from the edge of the warning track in center and right field. 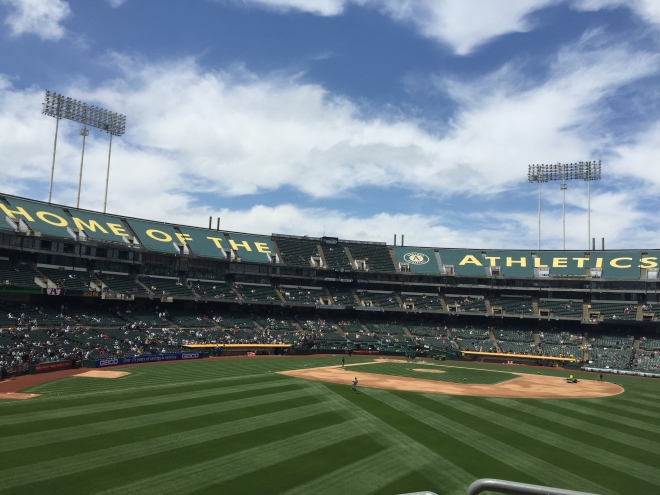 Entertainment and Amenities
The entertainment and amenities in Oakland were the fans.  There were not any specific locations designed for families or children. There were a few mid-inning games, but the majority of media on the video boards showcased the dancing and waving MVP of the stadium, the Oakland fanbase.

Fans
As we already alluded to, the fans were outstanding at O.Co.  They were engaged in the baseball throughout the game and ratcheted up in the intensity for the key moments (strikeout to end a threat, Billy Burns stealing both 2nd and 3rd base, etc.). The stadium was packed, granted this may have been because the Yankees were in town, but the atmosphere was much more passionate than the previous day’s game.

Shout-out to the Athletics
Just as in Seattle, the Athletics learned about our journey through Twitter and decided to feature us during one of their in-between inning games.  A tough multiple-choice question, which we were able to answer correctly!  Our reward was a coupon for free bacon for our entire section in the bleachers. Very cool Oakland, thank you.

Overall
O.Co was better than we expected.  The fans were outstanding and helped make the stadium feel as welcoming and warm as the 75 degree sun did.  Unfortunately, all the kindness and fandom the A’s could muster was not enough to overcome the giant concrete structure looming over us, dominating our experience.  We were left wondering what this fanbase would do with a designated baseball facility.  In our research, all the publicity and praise goes to the team on the west side of the Bay.  But these fans in Oakland were just as passionate and caring about their baseball, if not more.  They deserve better. 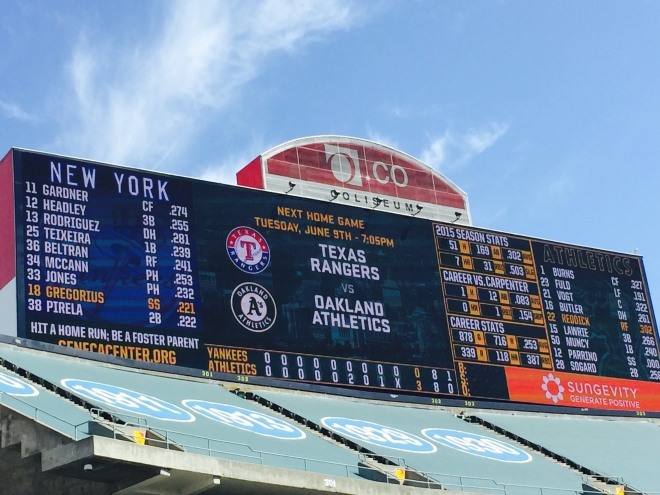 Speaking of that “other side of the Bay” team, The Giants are our next destination, whose proximity provided us some much needed time to rest after our mad dash from Seattle.  A stop at In-N-Out (a no-brainer for two guys from IL, a land devoid of such a delicacy) and a night in a downtown hotel is just what the doctor ordered to rejuvenate us in preparation for the famed AT&T Park.

~ Brian and Tim
(for more pics, make sure you check out our Facebook page, which is linked on the left of the site)